We moved our two 20 foot containers from Quartz Hill to the Titahi Bay RNZ premises on Saturday 12 June. Two large container trucks were used to move the containers. One of the trucks included a side-lifting crane for loading and unloading the containers

However, Murphy was definitely not on our side. What should have been a straightforward half day task turned out to be a complex full day project!

The first challenge was encountered when driving up Opau Road to the wind farm entance. Contractors were digging up the road to lay a fibre optic cable, so we had to wait for their machinery to be moved before proceeding. Then one of our two container trucks then got stuck in the soft soil that had been left on the road. The truck was eventually freed by using one of the contractors' digging machines to help tow it out. 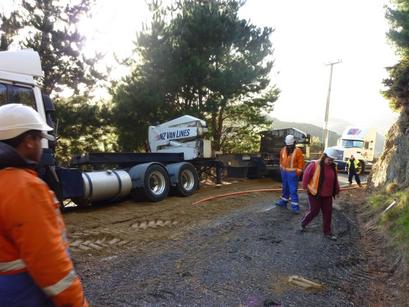 Above: Our side-lifting container truck gets stuck on Opau Road 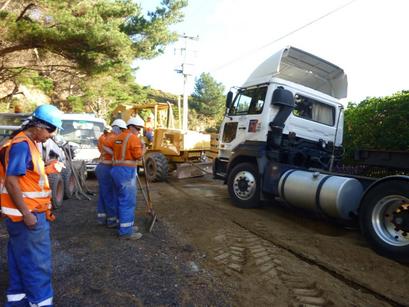 Above: A tow helps to get the truck moving again

The next challenge was encountered when trying to position the side lifting container truck alongside the containers. The containers were located on a grass slope with a gentle slope. The combination of the slope and damp ground meant that the truck could not gain enough traction and eventually became stuck. The cab from the other truck eventually managed to pull the side-lifting truck back to firmer ground, but not without a struggle including breaking the tow rope at least once during the exercise.

At this point (around 10:30 am) we decided that it would be necessary to seek the assistance of a hiab crane on a 4WD truck. After a number of phone calls we managed to track down and book a Franna 'all terrain' crane from NZ Crane Hire. The good news was that the crane could be made available in the afternoon and joined us on site at around 2:00 pm. The crane was brought onto the wind farm site via the South Makara Road entrance as Opau Road was still closed.

We initially tried using the Franna crane to lift the heavier of the two containers. The driver reckoned this container weighed 7.5 tonnes which put it right at the working limit of the crane. The crane did manage to move this container a couple of metres, but could not move it any further due to the wheels bogging down in soft ground. 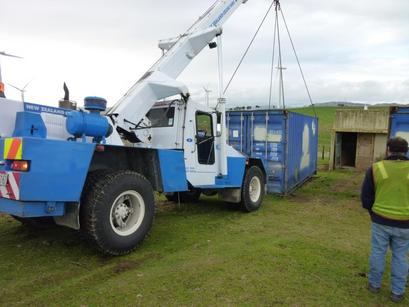 Above: The Franna crane attempts to pick up the 7.5 tonne container - note the rear wheels lifting off the ground

We then decided to divert our attention to the lighter container. It turned out that this container only weighed 3.5 tonnes, and the Franna crane was able to easily lift and load it onto the truck without bogging down. 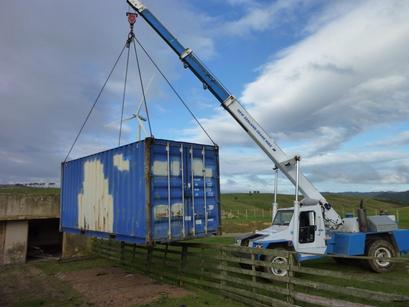 Above: The Franna crane makes easy work of picking up the 3.5 tonne container

A new plan was then developed to move the 7.5 tonne container. This plan involved using the side-lifting truck to pick up the container, and then using the crane to help tow the loaded truck up the slope onto firmer ground. Fortunately this plan worked, and without mishap! 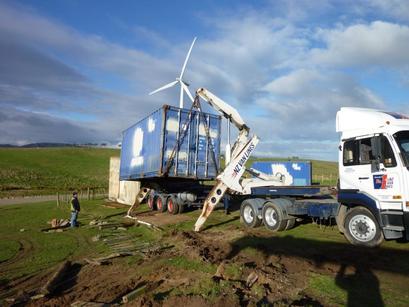 Above: Using the side-lifting cranes to pick up the 7.5 tonne container

The loaded trucks were then taken out via the South Makara Road entrance as there was still uncertainly about the accessibility of the Opau Road route. We reached Titahi Bay at about 4:30 pm and the containers were finally unloaded at around 5:15 pm, just before darkness closed in!

We are very grateful to the NZ Van Line contractors (Shane Sampson and Grant Issac) for the provision of the container trucks and staying committed to the task when the 'going got tough', NZ Crane Hire for making the Franna crane available at short notice, and First Security (Marcus) for assisting us with the site entry and exit arrangements.

Thanks also to Malcolm ZL2UDF, Frank ZL2TTS and Brian ZL1AZE who assisted with the operations. Of particular note was Frank's work in sweeping and vacuuming the interior of our area in the Quartz Hill building, while the containers were being loaded onto the trucks.