On Wednesday 29 April 2009, Brian ZL1AZE and Mike ZL2BCW attended a ceremony to celebrate the connection of the first group of wind turbines to the national grid at Project West Wind, Makara. This opportunity was the result of a formal invitation from Meridian Energy.

The celebrations took place at a considerable distance to the south of the Quartz Hill area. Prime Minister John Key pushed a very big switch which connected the operational turbines to the national grid.

Over 33 km of 7 metre wide roads link the Oteranga Bay wharf to each of the 62 turbine sites. Twenty five of the turbines have been erected and 15 of these have been commissioned.

Below: A view of one of the operational turbines near the First Power celebration. 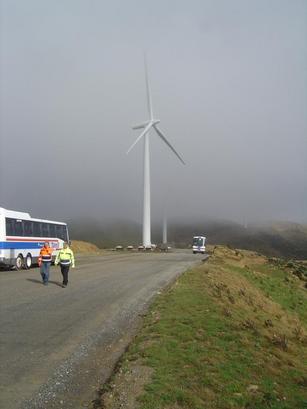 Brian and Mike were able to get inside the tower of a working turbine, but didnt climb to the top! The turbine structures are like the Tardis, they seem to be even bigger inside than they are outside!

After the speeches Mike and Brian took the opportunity to listen to the RF background noise level from the closest turbine. They used a portable HF receiver with a 10 metre length of wire as an antenna. Some noise was observed although it was not clear how much of it was due to the turbine since a nearby diesel generator (supplying power for the event catering) may have also been contributing to the noise.

Below: A photo of the wind farm on 2 May 2009, as observed from the Karori end of Makara road. 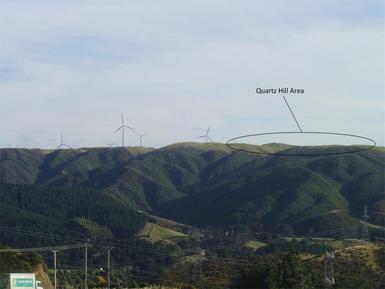