ABOVE: View of the ZL6QH station building and compound from the top of the pole that supports the 20M yagi antennas. Note the brand new colour steel roof which Meridian Energy has recently installed (to replace the old asbestos roof).

Saturday 2 December turned out to be a brilliantly fine day with clear skies and and virtually no wind - a welcome change after the windy condions experienced at Quartz Hill in recent months. At one stage we could even spot the 'white triangle' of Mt Taranaki on the northern horizon.

Most of the day was spent rebuilding and resurrecting the NA 20M yagi antenna which had fallen to the ground after the supporting catenary wire broke in the recent notherly gales (estimated to be at least 150 kph!). We have replaced the broken catenary wire with a heavier guage 3.15 mm wire (835 kg breaking strain) so hopefully this wire will have a better chance of surviving the next storm to hit ZL6QH.

Other tasks undertaken included adjusting the tension on the open wire feeders to the 20M NA and 20M EU LP yagi antennas, and continuing the assault on the rampant grass. Unfortunately the self propelled mower (loaned by ZL2BAP) lost power due to a slipping vee belt, so we had to resort to the old club mower and human traction!

We did not get time to address some of the other high priority maintenace issues around the antenna farm, including the repair of the 15M EU/AS yagi and the loose connection on the LF longwire. These will have to be addressed at one or more special working bees over the coming weeks.

BELOW: A view of the rebuilt 20M NA yagi as it is being hoisted into position. 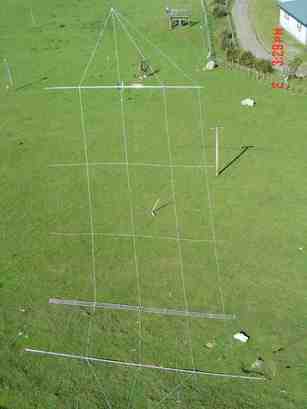