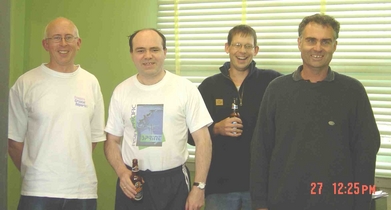 In the lead-up to the contest, ZL was hammered by 'severe gales'. ZL6QH, located overlooking Cook Strait, suffered accordingly.

The 'EU long-path' and 'USA' 20M yagis were flogged to death and subsequently came down in a rain of bits and pieces. Vindictive ZL6QH cattle (TM) made sure that those elements not already broken or bent were thoroughly 'fertilised' and trampled into the mud.

Adding insult to injury, days before the contest the catenary wire holding up our 80 and 160 m verticals let go. The 80M sloper was already SK, and this meant that we were QRT on several bands.

An open-ended series of daylight-to-darkness labour sessions were instituted, euphemistically dressed up as Activity Days. Unsuspecting 'supporters' were invited to help. The result was that by Saturday midday, the antenna farm was once again fully operational, with a larger and better selection of antennas than before.

CQWW-CW regulars Andrei ZL1TM and John ZL1BYZ travelled down to windy ZL2-land, joining Brian ZL1AZE and Wilbert ZL2BSJ. With only four ops, ZL6QH was a bit short-staffed. But even so, at the last minute it was decided to add a third station and take part as a multi/multi to make sure no one would get bored :-)

During the daytime, three stations was enough. Surprisingly, on our first sunset, it was found that all bands were open, and 80M and 160M had to be neglected somewhat in favour of other bands.

On the second day, ZL6QH was fogged in as 'severe gales' returned. During the morning, 10M appeared to be open as W3LPL was heard CQ-ing with strong signals on an otherwise empty band. ZL6QH ops stood around the radio, chewing the rag and discussing the vagaries of 10M propagation. LPL was duly spotted... until someone mentioned we had not actually worked the US on ten. Andrei ZL1TM wasted no time in logging the double mult.

Well before sunset, the 15M station went QSY to 80M to look for EU mults. Condx seemed good and the band was packed with strong Europeans CQ-ing...most of whom could not be worked :-(

A modest 80M run was started of US stations and the rate was OK until the EU big guns found out. From then on, the run-QRG was useless as the same people (who couldn't hear us) called and called. Back to 80M search and pounce! Soon afterwards, 160M opened for us to G, EI and W. After a while, a suspected intermittent junction in the LF antenna (close to the 160M antennas) began causing intermod reception problems for top band op Brian. It also transposed strong 160M QRM onto 80 m, which put us off the air on both bands after a while.

The next morning in the last few hours of the contest the 20M long path opened to the US East coast. 15M produced a steady stream of US callers, and in between kept the 15M ops busy with trying to work Caribbean and South American mults, mostly without success as the DX were beaming north.

The CQWW-CW is one of the best contest with an amazing amount of rare DX to be worked. Next year, ZL6QH maybe be QRX as a wind farm goes up on the site, but we hope to be back soon with a bigger and better station. Thanks for working ZL6QH. QSL via ZL2AOH. http://zl6qh.com