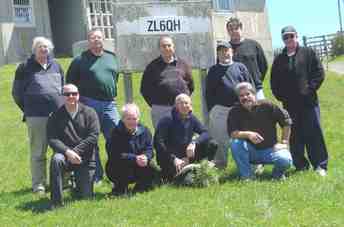 The ZL6QH super station atop Quartz Hill in Wellington New Zealand was again put to good use during the CQWW weekend, fired-up by a team originating from ZL, VK, and the US.

During the week prior to the contest, the station experienced 150 kph winds, requiring us to carry out urgent repairs. We were well rewarded with a visit to a local hostelry for sustenance and a libation or two. We all looked rather rosy in the cheeks, but this was due to being in the gale force wind all day and had nothing to do with booze. Honest! Severe gales were also experienced during the contest along with torrential driving rain but the sun finally came out as we packed up at the end of the contest.

The start of the contest brought 15M into life, with the log being nicely fed for a few hours, along with 20M and 10M adding to the fun. A good opening into NA near 1900z on the first day was swiftly capitalised to enable the 10M log to look a littler more respectable. 10M conditions on the second day were less stellar.

We experienced some reasonable conditions on 15M to Japan and NA. The EU path was variable at best, with a number of EU mults heard but not logged. The EU stations were often audible in the quiet conditions at ZL6QH, but our signals were swamped by the general band QRM in EU.

The recently installed twin 5 element 15M yagi antennas were given a serious test drive, one yagi fixed on JA/EU and the other on NA. They proved to be very effective, when the NA propagation faded away, the JA path appeared to open up and then vice versa - akin to a propagation pendulum!

20M performed well in the late afternoon and early evening, however, it was not always easy going as stations in the northern hemisphere were not beaming towards New Zealand. However, at the right times the 5 element wire beams, and the short and long path vee beams, pulled in the QSOs.

The 15Mm station ended up making slightly more contacts than the 20M station in a hotly contested race that was eventually put aside with a wee bit of whiskey between the rival operators.

Ralph K9ZO, the 40M op found operating conditions in New Zealand much more difficult to judge than he had experienced at other locations. New Zealand is near the antipode of Europe and the East Coast of the United States, which means that it is a long way from anywhere! However, Ralph enjoyed working friends stateside as the sun rose across the North American continent, as well as working the JA pileups, including DS2, JT0, and BY.

80m was difficult on Saturday night, mainly because of a loose wire at the feed point of our 80M/160M vertical antenna which caused a lot of QRN and made it difficult to tune the antenna. This problem was solved during the day on Sunday (after fighting gale force winds and horizontal rain!) so Sunday night was much better. There were some good openings to NA and via the long path to Europe, but it was very difficult to get through the QRM wall on the short path to EU.

Top Band conditions were not brilliant, with a number of EU stations (particularly the UK) calling to no avail! We were rewarded with 76 contacts and 9 zones on 160M. We were pleased to work some goodies like FY5KE, GI3OQR, VO1MP, and XF4DL.

The station equipment suffered a few casualties, with a linear amplifier deciding that sending RF to the ether was not longer within its remit, but making sparks within the tank circuit seemed much more fun. The circuit breakers popped a few times - usually during extensive concurrent CQing - which caused a stir! Bob ZL2AMI had an argument with his amplifier, as it decided to light-up like a Christmas Tree within the HV PSU. Bob, with his years of experience behind him, launched into the PSU with gusto and soon effected a working repair by replacing a glitch resistor that had gone up in smoke.

Considering the band conditions, the general feeling was that we hadn't missed any significant openings and couldn't really have done much better under the circumstances.

Malcolm ZL2UDF also dropped in on Sunday night to give the ops some well
deserved breaks.